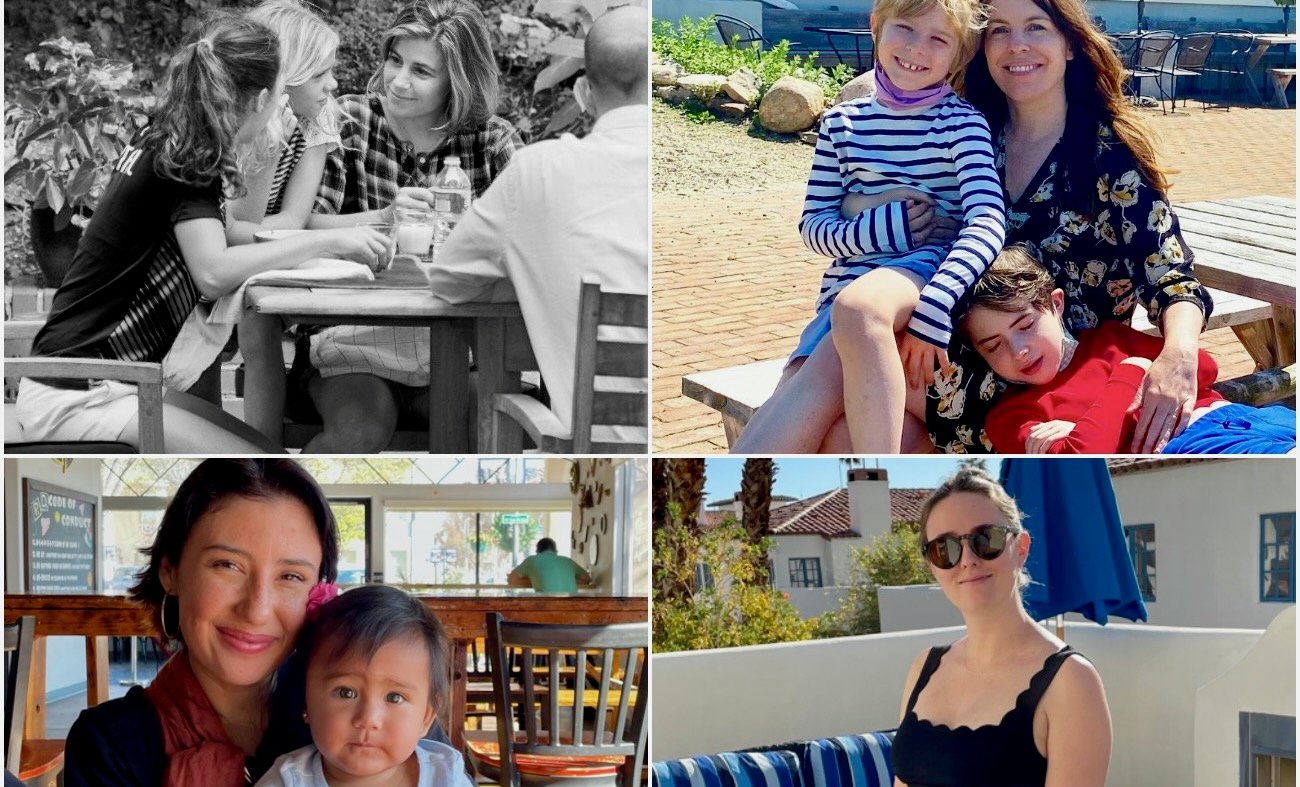 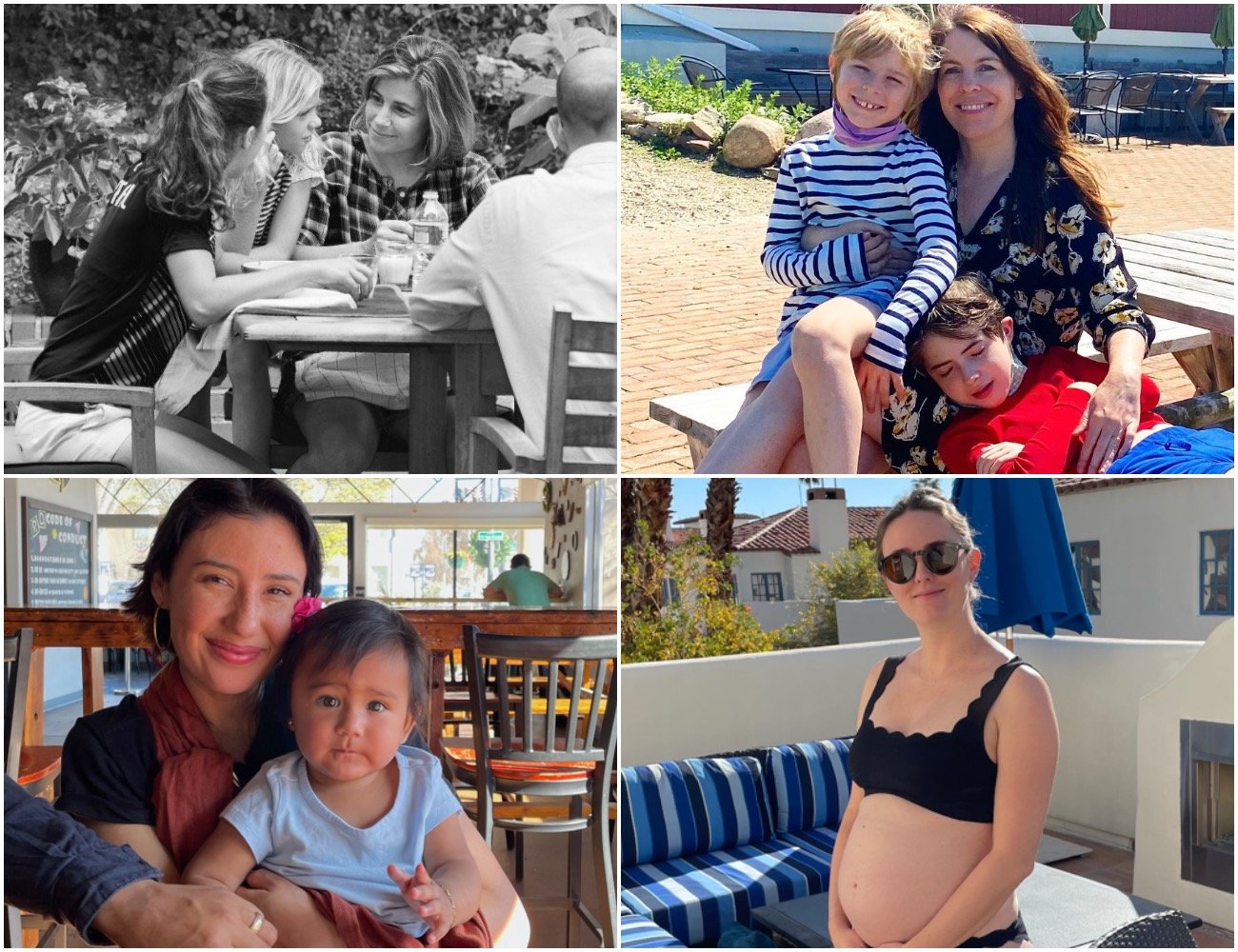 During a recent Cup of Jo team meeting, conversation veered towards our kids, and we realized that we are each in a different phase of parenting. At the time of this writing, Maureen was 39 weeks pregnant; Jannelle is the mom of one-year-old Ella; Joanna has Anton, 8, and Toby, 11; and Jenny’s two daughters (Abby, 18, and Phoebe, 20) have fled the nest for college. We decided it would be fun to swap notes on our day-to-day lives… 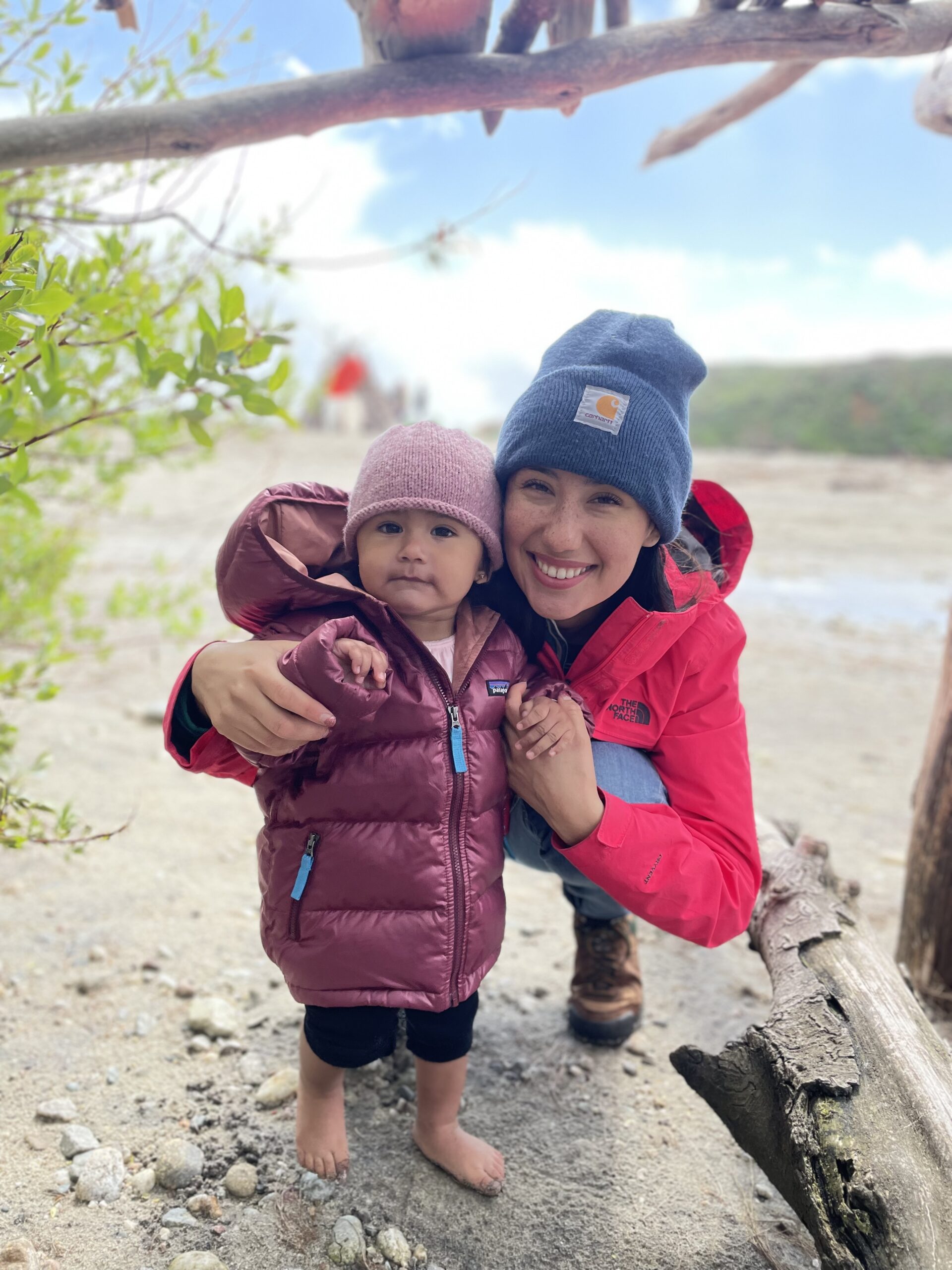 What time do you wake up?

Maureen (bump): I live in Seattle and work East Coast hours, so my alarm goes off at 5 a.m. Some days I squeeze in a workout; otherwise, I lie in bed cuddling my cat. I joke that I’m already on a baby schedule.

Jannelle (toddler): Usually I get up at 4:45 a.m. when my husband Max gets up and leaves for work, so I can have some time to myself. But, once a week or so, I’ll stay asleep until 7:30 a.m., when Ella wakes up. Sleeping in on those days feels like heaven, and usually after she wakes, I’ll bring her into bed with me for a 20 minute snuggle session.

Jenny (teens): 8:00, even though I’m not a morning person, and even though most days, in theory I could sleep until noon (no school drop-off and since I work for myself I set my own hours). I just feel guilty sleeping later than 8 a.m. on a weekday. Believe it or not, new parents, I miss that weekday morning hustle-bustle.

What do your kids do that legitimately makes you laugh?

Maureen: When I wake up, I’ll say ‘good morning, baby,’ and she’ll start kicking, almost like she’s saying hi to me, too.

Jannelle: When Ella gets excited, she clenches her fists, holds them up in the air, shrieks and literally her whole body shakes. It’s so hilarious and cute!

Joanna: I once read a quote that said toddlers laugh 400 times a day, and with slightly older kids, I feel like I laugh 400 times a day. Eight-year-old Anton is a hilarious dancer, and he does pitch-perfect impressions of everyone in our family. And we call 11-year-old Toby our ‘hype man’ because he’s always getting us psyched for random things (‘Guys! Who’s excited for dinner?!!!’)

Jenny: This is probably way funnier than it should be, but I laugh when I watch them attempt to fold their laundry (as opposed to rolling their clothes in a ball and shoving in a drawer). I am also endlessly entertained by the phrases they use with their friends and how horrified they are when I try to speak the language in my old-person world.

On an average day, what kind of physical touch do you have with your kids?

Maureen: Just kicks and flips, but I keep thinking about that moment where I first get to hold her!!! What does that feel like?! It must be one of the most emotionally intense moments of motherhood.

Jannelle: I’ve always been huge on physical affection, but having Ella has taken my touchy-feely tendencies to a WHOLE new level. All day, I pinch her cheeks, stroke her hair, kiss her belly, squeeze her legs, and give her hugs. Sometimes she gets frustrated with it all haha but usually she’s into it. And I love dressing her in regular t-shirts as opposed to onesies so I can have easy belly access.

Joanna: My boys are in 3rd and 6th grades, so I don’t need to carry them down the stairs or lift them into strollers. But they still cuddle on the sofa when watching movies or lean against me if they’re feeling nervous. Anton requests bedtime back rubs, but it’s funny, Toby was never as physical, even as a baby. He asks for what he calls ‘a resting cuddle,’ where we lie next to each other in his bed but we don’t talk or touch! We just lie there, and he loves that feeling of presence. It’s really sweet, and I like that he has figured out what makes him feel cozy and comforted.

Jenny: Not a ton. Since they became teenagers, it’s almost always me initiating the hugs and kisses. The exception is when we watch TV. Our couch is small, so they have no choice but to cozy up to mom. I can’t tell you how many mind-numbing shows I’ve suffered through, just for the excuse to be wedged in between them. 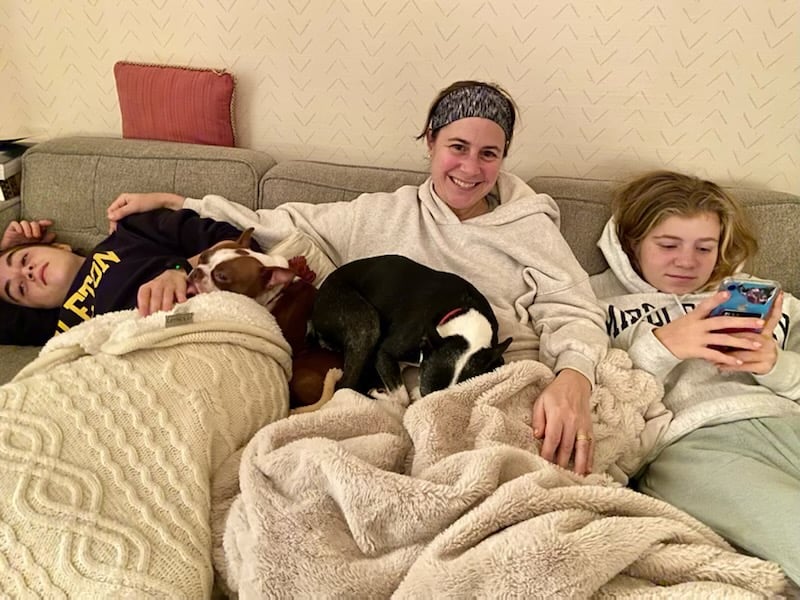 What nicknames do you have for your kids?

Maureen: Just ‘baby’ for now, although I’ve been testing out her name more and more.

Jannelle: Roo because she loves bouncing and Ella Bear because it sounds cute. So far she does not oppose.

Joanna: Tubs and Bony are the most regularly used. But now that they’re older, their rule is that we can’t use nicknames around their friends. And Anton says I’m not allowed to call his classmates ‘Sweetie.’

Jenny: No one is ever called by their real name in our house (Boo, Scraps and Rozelle are the most popular, though.) This also goes for the adults. Sometimes when we are in public and my husband is forced to use my actual name, my kids will look at him and say, ‘Did you just call her Jenny?’

What are your kids into right now?

Maureen: TBD, but I do know she’s active. Whenever I go for an ultrasound, they can never get a clear picture because she’s always movin’ and groovin’ in there.

Jannelle: Ella LOVES Encanto. Like, she will sit down and watch the whole movie. She also likes pop music (think Kacey Musgraves’s High Horse and Lua Dipa’s Cold Heart) and clicks her tongue to the beat.

Joanna: Eight-year-old Anton is into building Legos, walking to the bodega by himself, and trying to convince us that he’s old enough to drink Coke. Toby loves baking cookies and watching Full House. He’s also super into basketball. My eyes used to glaze over when it came to team sports, but I got hooked after Toby explained each player’s personality, strengths and weaknesses. Now I follow all the Warriors players on Instagram.

Jenny: This is the best phase — I feel way more plugged into the world because of my kids and their enthusiasms. (And at the same time, they seem to have come around to the idea that we were onto something with The Wire or The Clash.) One of my daughters is really into cooking (her cacio e pepe is as good as any I’ve had) which naturally warms my heart, and the other is a graphic novel obsessive, so her current heroes are Liana Finck, John Porcellino, Adrian Tomine, and Allie Brosh. Both are really into music and have radio shows on their college stations. Otherwise: Euphoria, Euphoria makeup, Emma Chamberlain, Liverpool FC (and the Premier League), The Ringer FC, Los Tacos, Donda 2, Baby Keem, Charli XCX, Shea Serrano, the BeReal app, Wordle (and all the spinoffs, especially World-le), iced vanilla lattes, Sally Rooney. 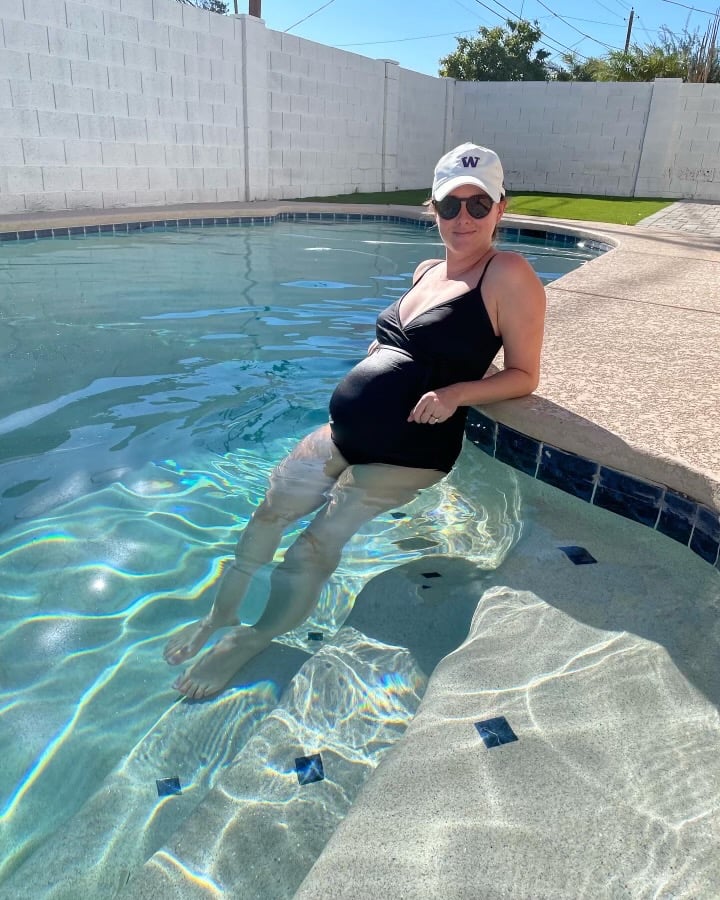 What aspect of your current parenting phase do you wish you could skip?

Maureen: Everyone telling me what NOT to name my kid. We are keeping the name secret until she’s born, but a ton of people will try to guess or say something like, ‘You aren’t going to name her [some random object], ARE YOU?’

Jannelle: Sleep training. It’s so rough and made me feel SO guilty hearing her cries, but having her go to bed at the same time every night is a lifesaver and gives me some much needed “me time” at the end of the day, where I catch up on reading, watching trashy reality shows, and catching up with Max.

Joanna: Showers and baths are a battle every time. Anton is a messy kid, and I wish I had a magic wand to help him keep his room clean. That’s all, I think! We’re in a sweet spot right now — the early baby days were very tough for me, the toddler days were all-hands-on-deck, and the teenager years seem likely to be intense. But, right now, we’re pretty smooth sailing.

Jenny: The early teen years, 13, 14, 15. Middle school drama can just be so terrible, and it was the first time in my parenting life when I couldn’t just step in and fix things for them. (In retrospect, I think it was probably harder on me than them.) In Anne Lamott’s hilarious Operating Instructions — a memoir about deciding to have a baby on her own — she wrote that one of the arguments in the ‘cons’ column was that one day her kid would have to be in eighth grade. (And there was no social media when she wrote that!) 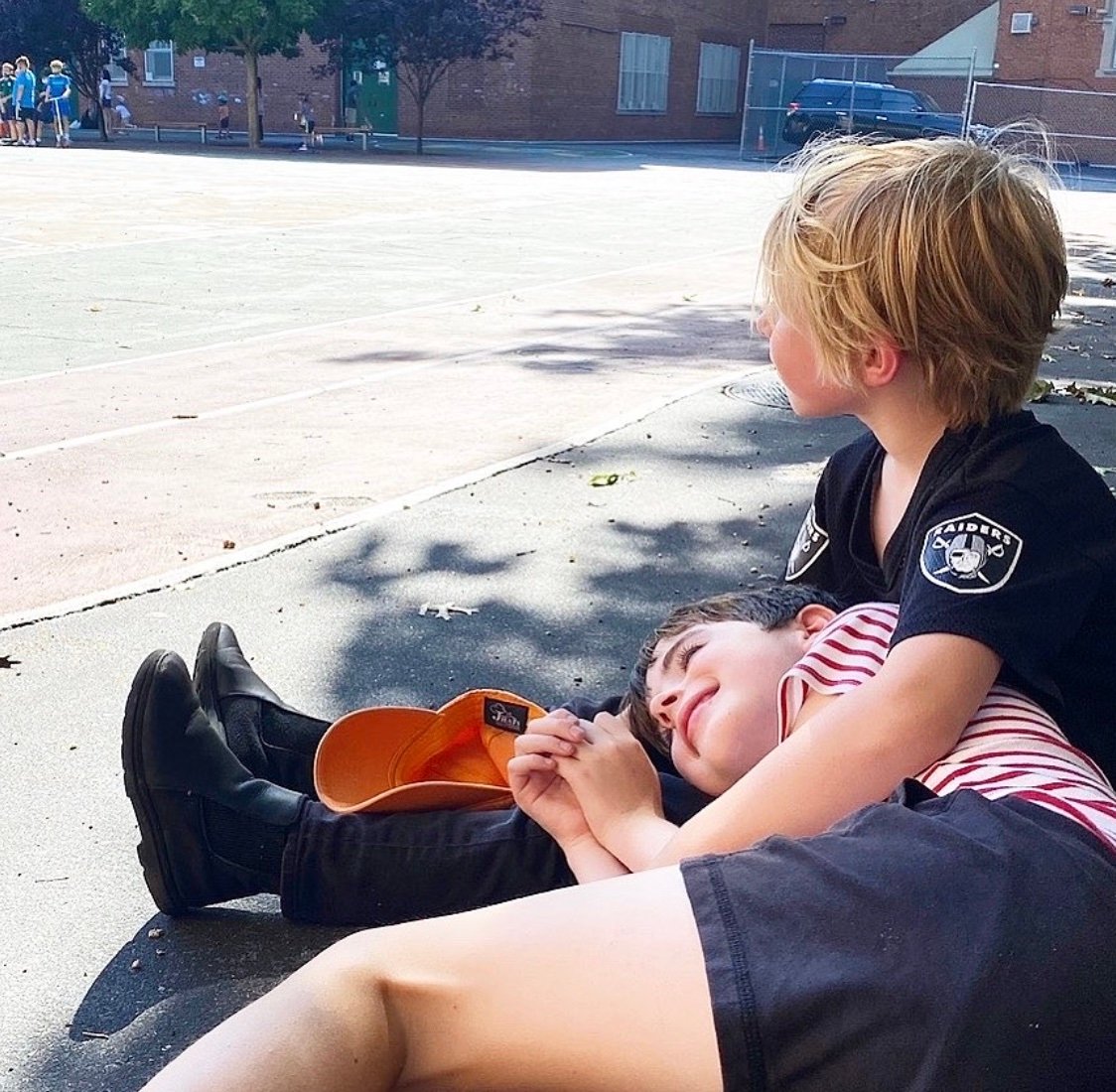 What keeps you up at night?

Maureen: I’m usually a decent sleeper, but now that I’m closer to my due date, I get up at least twice a night to pee.

Jannelle: Ella waking up for her feeds. She sometimes sleeps through the night (those nights are AMAZING), but we’re still doing some night feeds a couple times a week and it’s pretty tiring. I cannot wait for the day when she’ll sleep through the night every night, but I’m also scared to deal with all her feels when we start weaning.

Joanna: My #1 mission in life is to raise kind boys. I’m always lying awake trying to figure out how to help them keep their gentle sweetness intact as they grow up, even as they face pressures and influences of toxic masculinity. We talk a lot about empathy (‘The store owner is snapping at customers, he must be having a hard day or maybe someone in his family is sick’) and consent (‘You’re the boss of your body, and you don’t have to kiss Grandma if you don’t want to’), etc. We also talk about ways to be there for family, friends, classmates and neighbors. Boys can get a bad rap, especially in TV and movies, as stinky, rude, thankless creatures raised by their long-suffering mothers. But, over the past decade, my experience has shown me something completely different. I’ve met a hundred little boys, and they’re consistently sweet, vulnerable, funny, goofy and beautiful; and they desperately want to be good, kind and loved.

Jenny: Mostly, these days, I am wondering how involved I should be in my daughters’ day-to-day lives. My primal instincts would be to text and FaceTime and track them on Find My iPhone and SnapChat all day long! But of course I don’t do that. It’s not that I worry about where they are, it’s more that I just love knowing what they’re up to. It comes down to the struggle between wanting them to know I’m always here for them, but also making sure I’m giving them room to forge their independence and carve out lives for themselves in the big wide world.

What is going on in your parenting life right now, if you have kids? How would you answer these questions? xoxo

P.S. Six words to say to your child, and 21 completely subjective rules for raising teenage girls and teenage boys.

Heather Taylor’s L.A. Home Is a Patterned Fever Dream
What’s a Menstrual Disc, and Is It Better Than a Menstrual Cup? We Asked an Ob-Gyn
What to Know About Valerian Root and Its Potential Benefits For Sleep
Yoga Tips with Christina Sell – how to work on press handstand
How to Channel the Groovy Roller Skater Aesthetic